Artificial intelligence is intelligence exhibited by machines. In computer science, the field of AI research defines itself as the study of "intelligent agents": any device that perceives its environment and takes actions that maximize its chance of success at some goal. Colloquially, the term "artificial intelligence" is applied when a machine mimics "cognitive" functions that humans associate with other human minds, such as "learning" and "problem solving".

Computer vision is the science that aims to give a similar, if not better, capability to a machine or computer. Computer vision is concerned with the automatic extraction, analysis and understanding of useful information from a single image or a sequence of images.

— SDK for integration of the optical make and model recognition function, based on MMR technology.

— SDK for integration of the horizontal and vertical identification numbers recognition function that uses the ACCR technology. Numbers should be applied to freight containers according to the ISO 6346 standard.

— a transport infrastructure management system which uses information, communication and telematics   technologies to provide optimal solutions in a field of traffic flow management - maximize safety and mobility indicators as well as interaction efficiency among the traffic participants. European Commission Directive 2010/40/EU of July 7, 2010 refers the “ITS” term to the road transportation systems, however, does not restrict its usage with reference to other kinds of such systems.
Valid ITS components are:
- The Rules of the Road automatic violations recording system,
- traffic lights control,
- real-time traffic monitoring system,
- traffic participants informing procedures about road conditions, public transport schedules, vacant parking spaces, etc.
- GPS system;

— a class of Artificial Intelligent technologies that studies various algorithms constructing methods, that can be trained within one of the directions:

Since deductive knowledge is usually referred to the expert systems area, the “machine learning” and “learning by precedents” terms can be considered synonyms.
Machine learning methods tightly connected with Data Mining procedures and in use, in particular, in the areas of optical character recognition, ranking training and computer vision.

— a process of the most accurate vehicle make and model determination using images, obtained with ANPR technology while the best results can be achieved with at least two vehicle image projections. Basic vehicle type classification also is a part of this process.

— a conjunction of mathematical model and its software and hardware implementation built on the principle of biological neural networks organization and functioning - nerve cells of a living organism. ANN implementation is usually a system of interacting simple processors (artificial neurons) performing atomic operations. ANNs are used for practical purposes: forecasting, control and objects recognition problems.

— the process of assigning semantic tags to various objects. This is one of the fundamental problems in the field of computer vision and initial stage for the process of object detection, recognition and semantic image  analysis.

— a technology based on computer vision and digital image processing which performs semantic source data analysis in order to detect object instances of a certain class (people, road or railway objects) with maximum accuracy and self-learning ability.

— the next step of computer vision objects classification allowing to perceive distinctive properties of an object and apply semantic attributes - for instance, to identify an apple, taking shape, texture or color properties of an object into account. Same time, the system responsible for objects recognition binds the target object with the surrounding ones and has an ability to “understand” the purpose of an object and “remember” its previous attempts of perception. The object recognized is distinguished visually from the source image for the sake of clarity.

— the process of consecutive moving object location in the FOV (Field of View) of a video capturing device by frame-by-frame video stream analysis.
The main purpose is to match source object locations, taken from the sequence of frames, while the object itself is moving fast relative to frame rate. Tracking systems build model which describes object movement pattern which is used to predict the location according to observations already made - in order to solve this task. It is widely used in security, communication and video surveillance systems, traffic flow control systems and other ITS’s.

— a process of transforming digital images of typewritten, printed and handwritten texts into digital text data (a sequence of character codes) for their further editing and analysis. Various sources of information can be used within this process: scanned documents, photo and video clips as well as live video stream.
The ultimate purpose of the process can vary from cognitive computing, machine translation and text analysis to some specific computer vision problems: object detection, classification and recognition.

— the most common type of optical distortions caused by shooting lens, which is named after characteristic radial symmetry in the distortion structure.
There are several kinds of radial distortion: 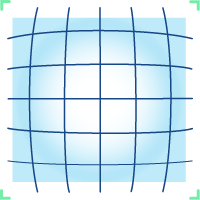 Image scale decreases along the distance from optical axis, the image distorted looks as if it was applied to the sphere or barrel. This type of distortion can be used for practical purposes - for getting hemispherical shots with “fisheye” lens. When using a lens with variable focal length value, “barrel” distortion is starting to appear in the middle part of focal length range and increases as it approaches to the wide-angle side of the range. 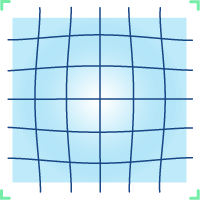 A combination of barrel (closer to the image center) and pincushion (toward the image sides) distortions. Horizontal lines on the upper of a frame look as slightly twisted up moustache (and “upside down” moustache in the lower half of a frame) as a result.

— a set of actions aimed at obtaining new knowledge and their practical application upon producing a new product, device or technology. Usually include the following stages:
- Research actions of theoretical or experimental nature, to determine technical feasibility of creating a new technology in a certain time frame.
- Experimental design and technological steps for the development of design and technological documentation for a prototype, as well as testing product prototype according to a technical task.

— a measure of the recognition algorithm (or engine) quality assessment, usually evaluated by the following formula: F = 2 * ((Precision * Recall) / (Precision + Recall)). The PRECISION and RECALL metrics are used to provide exhausted set of algorithm characteristics: Recall demonstrates the ability to detect a certain class in general, while Precision - the ability to distinguish the class from another ones. Recognition Accuracy reflects the balance between the Precision metric (which reduction makes algorithm more “optimistic” and increases number of  false positive results) and Recall metric (which reduction increases the count of “rejected” true positive results).
Below the illustration of the “contribution” of the metrics:

Rolling shutter (the Progressive Shutter term is also in use)

— a method of image getting when a single frame is formed not entirely at once but taken progressively from the forming matrix. The opposite if the “full-frame shutter” (Global Shutter) which forms a frame instantly, but concedes to Rolling Shutter in the field of final image quality. The Rolling Shutter technology is used widely in devices equipped with CMOS matrix (complementary metal-oxide semiconductor structure), whose advantages overlap disadvantages this technology completely.
Images obtained in this way are distorted since an object is displaced relative to photo or video device during the complete information reading from all rows of the matrix, i.e. different parts of an object are spaced apart. The main way to fix such kind of distortions is to apply post-processing to a photo and video material within specialized editors.
An alternative to CMOS matrix could be charge-coupled devices (CCDs): they perform operations of moving objects registration (which have recognition marks like identification numbers on railway carriages)  much more efficiently due to higher sensitivity, allowing to get rid of image artifacts. However, high cost is the main disadvantage of CCDs.

— a set of interfaces and libraries which is used by software developers for creating applications targeted upon certain software package, operating system or a hardware platform. SDK significantly reduces integration time between systems that differ by including code examples and technical documentation and having all the advantages of each platform.

— an international organization (established 20th of October, 1922), which unites national railway companies in order to solve problems in the area of railway transport development in collaboration, as well as to unify procedures and harmonize relationship among the European countries - members of international railway transportation system. Consists of about 199 representatives from all the five continents with railway connections nowadays.

— a technology recognition of the rolling stock (produced in FSU countries) identification numbers conforming to the standard used in the former Soviet Union countries (1,520 mm / 4 ft 11 27⁄32 in gauge), used by Intlab Wagon SDK.

— a technology recognition of the rolling stock identification numbers conforming to the UIC standard where is used (1,435 mm / 4 ft 8 1/2 in) gauge, used by Intlab UIC SDK.

Thank you for contacting us.

We have received your inquiry and will respond to you within 24 hours, or on the next business day.
If you already are our registered partner, you can use our online service desk to get our response within two business hours.